Geographically weighted regression (GWR) is an inherently exploratory technique for examining process non-stationarity in data relationships. This paper develops and applies a hyper-local GWR which extends such investigations further. The hyper-local GWR simultaneously optimizes both local model selection (which covariates to include in each local regression) and local kernel bandwidth specification (how much data should be included locally). These are evaluated using a measure of model fit. The hyper-local GWR approach evaluates different kernel bandwidths at each location and selects the most parsimonious local regression model. By allowing models and bandwidths to vary locally, this approach extends and refines the one-size-fits-all "whole map model" and "constant bandwidth calibration" under standard GWR. The results provide an alternative, complementary and more nuanced interpretation of localized regression. The method is illustrated using a case study modeling soil total nitrogen (STN) and soil total phosphorus (STP) from data collected at 689 locations in a watershed in Northern China. The analysis compares linear regression, standard GWR, and hyper-local GWR models of STN and STP and highlights the different locations at which covariates are identified as significant predictors of STN and STP by the different GWR approaches and the spatial variation in bandwidths. The hyper-local GWR results indicate that the STN processes are more non-stationary and localized than found via a standard application of GWR. By contrast, the results for STP are more confirmatory (i.e., similar) between the two GWR approaches providing extra assurance about the nature of the moderate non-stationary relationships observed. That is, a standard GWR may underestimate localized spatial heterogeneity where it is strongly present (as in the STN case study) and may overestimate it where spatial homogeneity is present (as in the STP case study). The overall benefits of hyper-local GWR are discussed, particularly in the context of the original investigative aims of GWR. A hyper-local approach provides a useful counter view of local regression modeling to that found with standard GWR. Where spatial non-stationarity exists, the hyper-local GWR provides a more spatially nuanced indication of the localization than a standard GWR analysis and can be used to suggest the direction of further analyses and investigations. Some areas of further work are suggested. 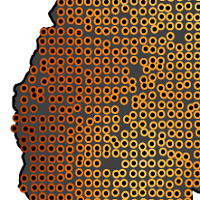 No. 17 (2018): Special Feature on Bridging space, time, and semantics in GIScience