As technologies permitting both the creation and retrieval of data containing spatial information continue to develop, so do the number of visualizations using such data. This spatial information will often comprise a place name that may be "geocoded" into coordinates, and displayed on a map, frequently using a "heatmap-style" visualization to reveal patterns in the data. Across a dataset, however, there is often ambiguity in the geographic scale to which a place-name refers (country, county, town, street etc.), and attempts to simultaneously map data at a multitude of different scales will result in the formation of "false hotspots" within the map. These form at the centers of administrative areas (countries, counties, towns etc.) and introduce erroneous patterns into the dataset whilst obscuring real ones, resulting in misleading visualizations of the patterns in the dataset. This paper therefore proposes a new algorithm to intelligently redistribute data that would otherwise contribute to these "false hotspots," moving them to locations that likely reflect real-world patterns at a homogeneous scale, and so allow more representative visualizations to be created without the negative effects of "false hotspots" resulting from multi-scale data. This technique is demonstrated on a sample dataset taken from Twitter, and validated against the "geotagged" portion of the same dataset. 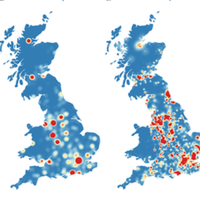