A comparative study of linear and region based diagrams

There are two categories of objects spatial information science investigates: actual objects and their spatial properties, such as in geography, and abstract objects which are employed metaphorically, as for visual languages. A prominent example of the latter are diagrams that model knowledge of some domain. Different aspects of diagrams are of interest, including their formal properties or how human users work with them, for example, with diagrams representing sets. The literature about diagrammatic systems for the representation of sets shows a dominance of region-based diagrams like Euler circles and Venn diagrams. The effectiveness of these diagrams, however, is limited because region-based diagrams become quite complex for more then three sets. By contrast, linear diagrams are not equally prevalent but enable the representation of a greater number of sets without getting cluttered. Cluttered diagrams exhibit inherent complexity due to overlapping objects, irrelevant details, or other reasons that impinge upon their legibility. This study contrasts both types of diagrammatic systems and investigates whether the performance of users differs for both kinds of diagrams. A significant difference can be shown regarding the number of diagrams that can be drawn within a fixed period of time and regarding the number of errors made. The results indicate that linear diagrams are more effective by being more restrictive and because region based diagrams show much clutter due to overlapping, coincident, and tangentially touching contours, as well as an overwhelming number of empty zones. Linear diagrams are less prone to errors and do not suffer from clutter. 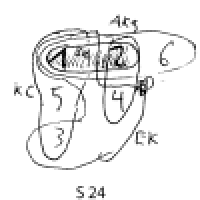