This paper describes a framework for capturing geological structures in a 3D block model and improving its spatial fidelity, including the correction of stratigraphic, mineralization, and other types of boundaries, given new mesh surfaces. Using surfaces that represent geological boundaries, the objectives are to identify areas where refinement is needed, increase spatial resolution to minimize surface approximation error, reduce redundancy to increase the compactness of the model and identify the geological domain on a block-by-block basis. These objectives are fulfilled by four system components which perform block-surface overlap detection, spatial structure decomposition, sub-blocks consolidation, and block tagging, respectively. The main contributions are a coordinate-ascent merging algorithm and a flexible architecture for updating the spatial structure of a block model when given multiple surfaces, which emphasizes the ability to selectively retain or modify previously assigned block labels. The techniques employed include block-surface intersection analysis based on the separable axis theorem and ray-tracing for establishing the location of blocks relative to surfaces. To demonstrate the robustness and applicability of the proposed block merging strategy in a more narrow setting, it is used to reduce block fragmentation in an existing model where surfaces are not given and the minimum block size is fixed. To obtain further insight, a systematic comparison with octree subblocking subsequently illustrates the inherent constraints of dyadic hierarchical decomposition and the importance of inter-scale merging. The results show the proposed method produces merged blocks with less extreme aspect ratios and is highly amenable to parallel processing. The overall framework is applicable to orebody modeling given geological boundaries, and 3D segmentation more generally, where there is a need to delineate spatial regions using mesh surfaces within a block model. 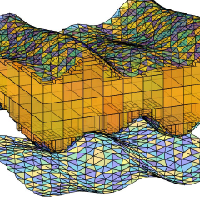